Martin is MESA10 analyst since 1993. He graduated from the Faculty of Management of the Comenius University in Bratislava (1997) and Institute for International Relations and Law Approximation in Bratislava (1999). He was a consultant for a number of cities and self-governing regions and respectable institutions, among them Slovakia´s Plenipotentiary for decentralization and public administration reform, Canadian International Martin is economic and decentralization expert of MESA10Development Agency, UNDP, Slovak Agency for International Development, Slovak Ministry of Justice. He is an author of innovative instruments for public decision-making (calculating poverty in local level for the World Bank, optimal localization of regional offices used by the Slovak Tax Office and several ministries, localization of emergency stations used by Slovakia´s Ministry of Health, input-output model for calculating macroeconomic and fiscal impact). He is a prolific author and his more than 40 specialized publications include development strategies on local, regional and state level, regular contributions to “Slovakia, Report on the State of Society” as well as publications on economic reform, judicial reform, institutional reform, social reform, funding of regional self-governments, consequences of Slovakia´s membership in EMU, current crisis. 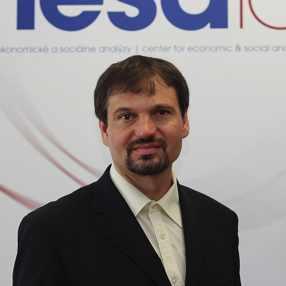