Lucia is Project Director and Consultant for the Western Balkans and European political parties. She has just completed her PhD thesis at the Institute of International Relations and European Studies of the Comenius University in Bratislava, where she teaches a course on European political parties. In 2010-2012, Lucia was the Chief of Cabinet of Deputy Minister at Slovakia´s Ministry of Foreign Affairs, where she focused mostly on the institutional Lucia is expert on Western Balkans of MESA10reform of MFA, on common projects with EU Commission and on the policies towards Western Balkans. Before that, she worked as the Director of the International Office in the Central Office of Slovak Democratic and Christian Union – Democratic Party (2005-2010). In this capacity she also represented SDKU-DS in the Political Assembly of European People’s Party in Brussels and managed common projects with Center for European Studies in Brussels. Currently she co-operates with MESA10, where she focuses on projects on the transfer of Slovakia´s reform experiences and EU and NATO integration to the countries of South-Eastern Europe, with a special focus on Serbia and Kosovo. 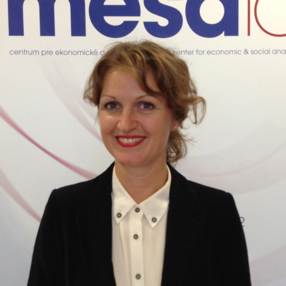