Opinion polls taken after 2013 Spring and Fall Semester Debate Tournaments between the University students of Serbia and Slovakia show that the majority of them believe that NATO member states are their friends. In the Fall Semester 57,9 % of students responded yes, while in the Spring Semester the same response reached 79,2% (Fig.1).

The students are eager to learn about European and Transatlantic security (Fig.2) and are interested in working on joint security projects with students from other countries.

They are also of the opinion that NATO membership helps fulfill criteria for membership in the European Union. Less than 31% of the students believe that staying out of NATO has a positive impact on national security, national defense capabilities or public finances. More than 80% of the students identify economic crisis as a security threat, while a similar number of students consider the European Union their strongest security friend.

For more information, please download our Handout with the results of the opinion polls among the University students.

Handout: 2013 Debates of University Students from Serbia and Slovakia 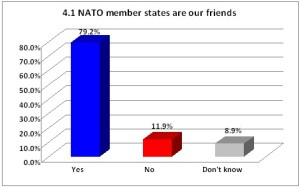 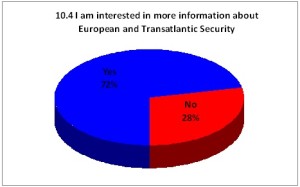